Captain Alexander Emerson welcomes Lieutenant Joseph J. Byrne to the Vice Unit upon his promotion on September 6, 1951 to be the field commander and to lead gambling raids.

It was just a “run-of-the-mine strip-tease act,” according to Defense Attorney Joseph F. DiDomenico.

But to a policewoman and four policemen it was something more than that–enough, in fact, to justify a charge of presenting an indecent show against Mrs. Carmen Benton, thirty-three, Mrs. Benton, who lives in the 700 block Reservoir street, was arraigned Wednesday before Magistrate William F. Laukaitis in Central Police Court. She let Attorney DiDomenico do the talking for her.THE VARIOUS policemen did some talking too. Patrolman George Fink of the police vice squad testified that Policewoman Miss Betty Riha and Patrolman Kenneth Runge dropped in at a cabaret In the 600 block East Baltimore street Tuesday night and were much intrigued by a dance presented by Mrs. Benton. They were so interested, in fact, that after seeing only part of the show they phoned for Patrolmen Fink, John Livesey and Melvin Howell to join them. The three vice squad men lost no time in hurrying over from headquarters.AFTER THE dance, Mrs. Benton was arrested, and Mrs. Catherine Darrell, forty-six, one of the proprietors of the club, also was charged with permitting an indecent show to be presented. There was some testimony about a brassiere Mrs. Benton wore or didn’t wear, but Defense Attorney DiDomenico denied it had been removed. Magistrate Laukaitis postponed the case until Saturday morning to permit the defendants to produce witnesses who would say Mrs. Benton’s dance wasn’t indecent—-that it was just of run-of- the-mine strip act, as Mr. DiDomenico.

4 Charged With Gambling, 5 With Disorderly Conduct

An eleven-man team broke up a bookmaking operation yesterday afternoon at a tavern in the 1200 block William street and arrested the tavern owner, a bartender and, a third man. Sergeant Arthur McGee said it was a “right good-sized operation.” Paraphernalia seized as evidence included a list of bets tossed from a second-story window. Some of the bets ran as high as $80, Sergeant McGee reported. The vice squad had had the place under surveillance several days. When Patrolman Philip Farace reported he had seen bets placed and heard talk of horses as he mingled with patrons at the bar, Sergeant William Hogan obtained a search warrant. Raid .time was 3:50 P.M. Three vice squad members, Sergeant Hyman Goldstein and Patrolmen George Fink and John Huemmer, took stations at the three entrances to the building. Patrolmen Robert Byrne, Charles Richter and Edgar Kirby entered and posed as customers. Five minutes later Lieutenant Joseph Byrne, Sergeant McGee, ‘Sergeant Hogan, Patrolman Farace and Patrolman Melvin Howell walked in, went to the back of the tavern and, with a crowbar, forced a door leading upstairs. They got no answer when they banged on a second-floor door, and Sergeant Hogan sprung the lock with a firm kick. Inside they saw a man run to a window and throw a wad of paper through it. Outside, Sergeant Goldstein picked the paper up. From the desk at which the man had been sitting by a telephone, Sergeant McGee recovered a payoff sheet, a scratch sheet and other bookmaking paraphernalia. Charged with bookmaking after the raid were Anthony Lindung, 43, owner of the tavern, who was arrested at his home; Edward Reitz, 50, of the 800 block Woodward Street, and Charles L. Eid, 44, bartender, of the 5700 Block Second Avenue. Each was released in $2,500 bail pending a hearing this morning in Southern Police Court. 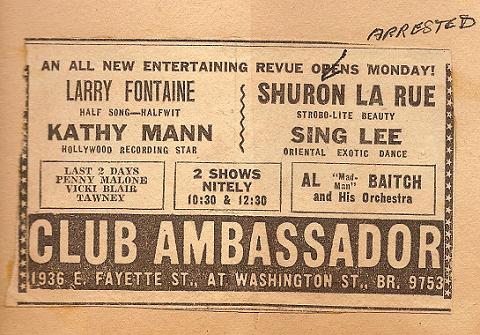